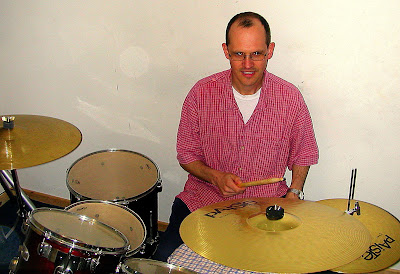 Scheduling issues meant that a room wasn't ready for us so the first half hour was spent going through the structure of songs with Dom practising on a coffee table in the foyer.

Eventually made it into a very clean rehearsal room.

Don't tell Ben at Valley Studios but this studio knows how to kit out a rehearsal room. Guitar brackets on the walls, neatly arranged guitar amps, whiteboards with pens that have attached pen tops, and, in a move to quite literally dispel the image of studios being full of smelly boys with guitars, the offer of a burst of air freshener to banish any lingering presence of the band practicing before us.

Oh yes, and lights that work.

Dom stands in as drummer to cover the upcoming schools' tour and manages to make his first rehearsal since, well, the last time he played with the Loopy boys in Southampton some years ago.

Depeche Mode's 'Just Can't Get Enough' was worked on whilst the lads also ran through 'Evel Knievel', 'Too Late', 'Corner Of My Mind' and 'Somersaults'. Dom has to leave early but as he gets up to go he is easily enticed back on to the drummer's stool by a rendition of Teenage Kicks.

Found a pub called the Hog's Head in the centre of Newbury to prattle in, post-Practice. By the canal. Topics of Conversation: Microsoft Bar Codes for the album cover; the forthcoming popcast; using one's children to experiment with nominal determinism; overhauling the loopy website.
at Wednesday, May 27, 2009 No comments:

If, for some reason, you are twangling yourself up in the twebsite that is twitter then feel less like a lonely twool and add us to your posse of tweeple.

A bunch of girl guides were hanging outside the studios this evening: something to do with a recording that Ben had let himself into.

Meanwhile, back in the darkness - one bedside table lamp attempting to feebly light up the rehearsal room - songs were worked on. Lie Detectors, Gallery of You, Sparkle and Shine. Plus a rare visit into the Ska magic that is Startin' Out. 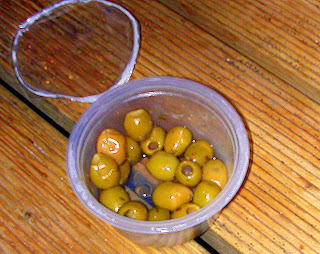 Post Practice Pint Prattle at the Pub: Olives were bought; Eg likes Ad's jacket and wore it with the scarf - he managed to perfect the round-the-neck scarf-flick with some artistic elan; Anchovy stuffed Olives vs Garlic Stuffed ones; Tom's Turkey burgers; Fea's new room in his attic; Chris Powell & Martin Potter's slightly less than magnificent support performance all those years ago - TWP and their fans legging it; there will be eyelashes, and lots of them, in your computer keyboard; Fea threatens Ad with a South Coast while Ad awaits a Half-term Whiskey Evening invite from Eg.

Eg reluctantly gives Ad his jacket back.
at Wednesday, May 20, 2009 No comments:

Eg wisely brought a music stand this evening in order for him to better place the enlarged lyrics he had been given for the newer songs.

Rattled through the album and rehearsed Depeche Mode's Just Can't Get Enough for the schools' tour in couple of months. Practiced 'Sparkle and Shine' and worked hard on 'Gallery of You' while also getting a better feel for new numbers 'Lie Detectors' and 'Sky Above My House'. Revisited 'Startin' Out' in honour of the recent Ska revival.

Tom had had a vegetarian meal earlier.

Post Practice Pint Pub Prattle: Fea's got a hole in his budget; Tom went to Brighton for a saucy weekend and watched three cracking birds on the beach [they were cracking crabs open by dropping them from great heights]; Ad got a new podcasting client; Eg went to Centre Parks with the family and slid down a zip wire the right way while cursing the other parents; Eastern European cigarettes; Eg will be getting Tom to translate the Sziget Festival gig guide before marching off on a well planned festival foray while Ad will follow the one that looks like they know what they're doing - the flat is further from the festival than first promised; Tom getting rollocked on a hospital balcony by the wife of his fellow smoker who had just had a heart attack and had promised her he had given up; photos of the old days
at Wednesday, May 13, 2009 No comments:

In spite of a mysterious and misinformed text message from Valley Studio Manager Ben that claimed the band had a particular room already set up with four microphones etc. Practice this week occurred in Emsworth.

Eg's had familial birthday duties to attend to and Fea was off presenting The Rayner Cup to some poor low-achieving, unsuspecting, uncooperative pupil who still doesn't know what they must have done wrong to have deserved such a playground taunt-earning gong.

Little Ash was there when Tom turned up and, after fixing a string to Ad's seemingly unplayed acoustic, played on the first ditty. And then left. Rightly so.

The rehearsal focussed on the School's tour coming up in July with Depeche Mode's 'Just Can't Get Enough' covered. The presumtpion being that the very young pupils at these schools will be too young to even remember 'It's All About You' by McFly.

The evening's music playing was curtailed by the two non-Rayners talking about old times [image below: debut gig], previous bands, the lovely Aimee Rose, the Angry Maisie Moo and how good it would be to have the loopy mail coming through Gmail's interface. Ahem.

Oh and Manchester United beat Arsenal in the Champions League Semi-Final - Ad n Tom raised a sympathetic toast to gooner, Eg: Ad with a can of lager, Tom with a cup of Lapsang Souchong. Or was it peppermint tea? 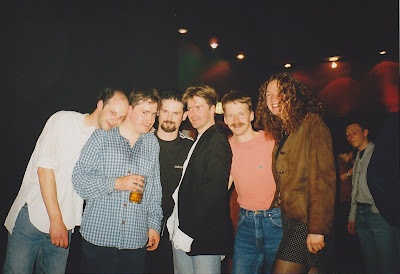