An early start for a gig saw the band turn up at Stanmore School for 0900hrs. The boys made their way straight to the assembly hall while teachers made cups of tea and coffee as a welcome. There they hung around for the children to file in before being introduced to the school. The rapturous and enthusiastic applause was a bit of a surprise, but set the boys up for the rest of the day. Though it was very worrying to hear, and quite difficult to play through, some very out-of-time clapping by a few hundred children. 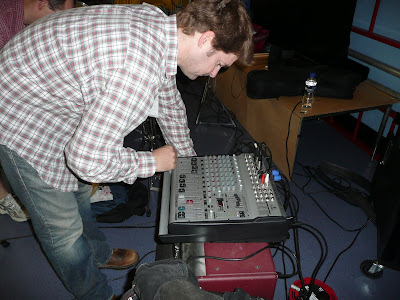 For the next venue [Felix's school] Dominic joined up with the show to play drums. The band set up with plenty of space and when the children came in and settled Fea turned the whole show into a lesson of music and of co-operation. Nice. As an example of how awful not cooperating can be, he [seemingly off the cuff] asked each band member at a time to play a song that was different from what any of the others were playing. The cacophony got the point across before the set was embarked upon. 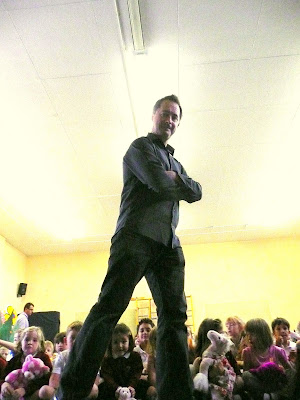 The children were so excited they were becoming 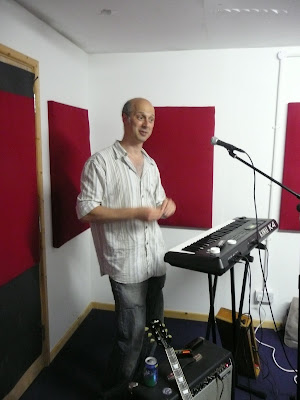 'unsettled' and the teachers who were sitting next to their classes, down the sides of the hall, were often making incursions into the crowd to get variously excited kids to sit down properly and behave.

The applause and cheering after each song was loud, appreciative and uplifting. It was as if Loopy were a proper pop band doing a proper gig to proper fans. Not that any of the band members would have admitted this, of course.

And onto Hagbourne. Eg's wife Shelley's school. Again, a similar reaction to each and every song. There was one kid who sat in the middle of the crowd with an amazing hair do. Like a white man's afro. One little boy came up to Tom afterwards and started talking 'Guitars'. One girl came up to Ad and looked up at him to ask if he was Scottish.

Not all the children in the front rows enjoyed the experience all of the time [front left].

The day ended with a rehearsal at Uprising Studios, Newbury - in preparation for the Gig at the Bear. Every one tired, exhausted and realising they couldn't possibly be a proper band doing proper tours. 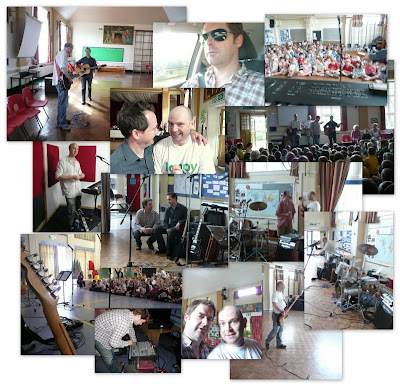 Final Practice before the Schools Tour

Ran through the songs to be performed at the three schools this coming Friday. All written on the lovely, fresh-smelling whiteboard. Using the pens with the unloseable caps.

Dom bought the boys a can of pop each during the break, seeing as they had behaved themselves so well.

Eg went home to write reports. Dom left at the same time. Ad, Fea and Tom went to a local pub for their post-Practice pint. They talked about the album cover; the arrangements for Friday's giglettes; Loopy-influenced nostalgia for the WAGs and Ad using North Moreton's The Bear as a kind of launch party venue. Tasteless.
at Wednesday, July 08, 2009 No comments: