Someone's Here, Not There, in The Sky Above My House 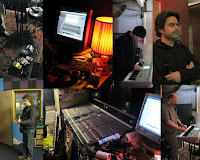 The plan was to continue recording. Experimenting with Sky Above My House and seeing if Ben could find that old tension-relieving recording of Someone to finish. Also managed to get a brand new song finished: Here Not There - written by the Noizees, fronted by Eg's youngest daughter Jessie, aged 10 - started with Tom struggling to keep obedient to the click track and ended with his low and laid back voice beautifully fleshing out the rather jolly harmonies.


Does Tom buy a ukulele and a cheap banjo? Or just a ukulele? And can Eg's tambourine skills keep up with the click track? Bottle of white wine to help the creativity flow and Ben's been thinking about buying yet another Cortina. He's also only gone and cleaned half his mixing desk and half the studio. Something's half in the air.

Ben's Foster Child in the Sky Above My House 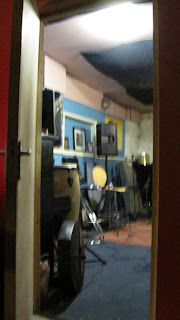 Time for some more recording.

With the lack of regular drummer the boys are left with the desire to just Do Some Recording. Hence this evening.

Tom has lost his voice, or rather, seems to have found it behind a dusty old shed, in the dark, gravelly back yard. Everyone is unsure if it's as sexy as it should be. Singing is out for him this evening, however. Which possibly explains the light mood all round this evening.

Fea and Eg turn up with Eg providing the cheap German 'Champagne' in order to celebrate Fea's Fortieth, last week. Tom gives the group the benefit of his tasting experience by critiquing it.

All the more funnier due to his loss of voice. For example...

Loopy inform Ben that the track for this evening, born some time last year, is called 'Sky Above My House'

The recording is actually started by working out how the evening should pan out. The initial idea begins with laying down a click track. Fea puts his guitar down and tries to keep in time with the robotic, perfectly paced 4/4 high-hat hit that Ben's desk generates.

It's not as easy as it might sound and after Ben does some jiggery pokery with his editing skills the guide track, with an Eg guide vocal, is laid.

Ad puts his tenor ukulele over the top of that and adds a simple bass line. Eg adds a confident vocal on his second run through and leaves a pleasing impression on the promise of what could be a nice evening's work. Ad harmonises, somehow, and Fea shouts tunefully thereafter. Tom rasps out some rather nice harmonica before midnight strikes and everyone scuttles home, pleased with the outcome so far. Ideas are flying around about how the recording can be developed. Cello, Choir, Brass?

Being in a band is a good thing. 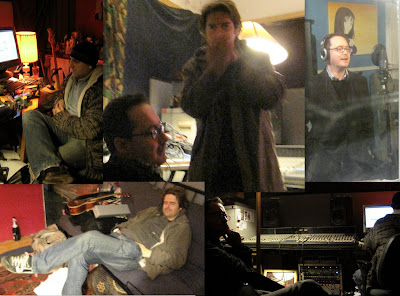