Fea turned up in his £10 suit that he wears for work and Tom had to read out the 'Thank You' note from the Bride of the wedding from the previous gig to each of us as we turned up.

Hearts Pumping, Secrets and Lies, Gallery of You, Take On Me, 21, Wild End.

Post-Practice Pint: Much self-congratulatory back-slapping over the last gig's conditions with which the band marvellously coped. Gigs from the past; St Cross College, The Jericho Tavern. How many tracks make an Album as opposed to an E.P. Eg thinks 7. This Year's Band Christmas Do. The blog being A Good Thing. The Sziget Hungarian Festival next year where Tom will try and get us a slot. New covers to do. WOrking 9 till 5 and Morning Train being particularly good ones. 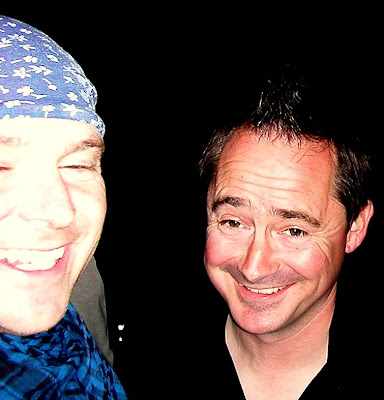 Venue: Barn, in the middle of nowhere somewhere perhaps around Winchester.

Well, it was when Tom confessed that it wasn't actually Jeremy Irons's Niece that was to marry, it was his Step-Niece, if there is such a thing. So, no, Jeremy was not there. Everyone booed Tom.

The Sound's the Limit
Now in the past, the band has played venues with sound limiters. Where once the noise levels have reached a certain point the power for the band cuts out. Usually, these sound limiters come in the form of a small 'traffic light' box in the roof or on the wall. Once it hits red, you know you have a few seconds before the power will be cut off. Well, at this venue the power cut off without warning. All of the time. The limiter was set to 60dB. Even the bride apologised to the band. 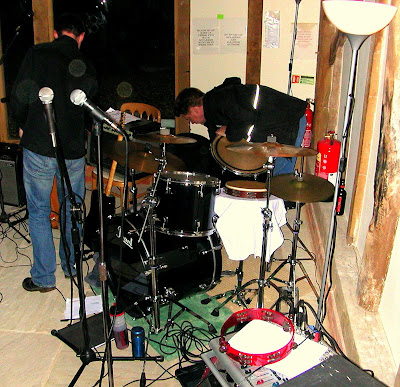 The rest of the evening was spent with the amps sometimes being off, sometimes being on but the Loopy show carried on regardless. Gi's drumming could be heard throughout and the crowd were drunk enough to just sing along and not really notice that our amps had stopped working every now and then. 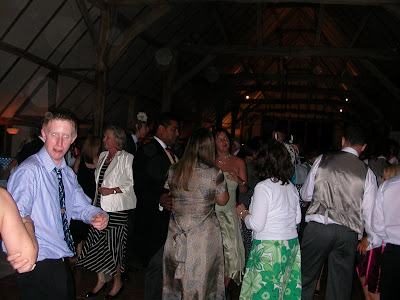 Girls who suddenly think it's a Karaoke
And talking of drunk crowds. Ad had to suffer, yet again, a determined stage 'presence' grabbing at his microphone. This time Eg had his hands full too with another one. But she wasn't as drunk. And neither was she an oddly shaped Irish girl [or was it the way she was standing/just about the fall over backwards]. Her hips deadened the bass strings, and her saliva splattered over the cheek, but, like real pros, the band carried on. 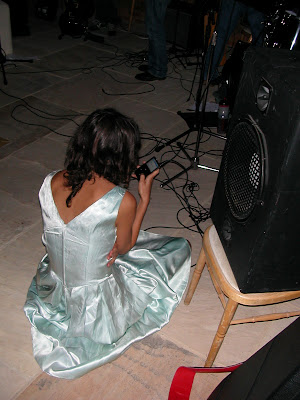 Gi wasn't too chuffed with the sandwiches and lack of Champagne making it stealthily into his bass drum. 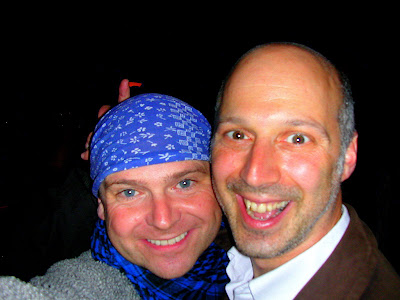 The Catering Staff. The Sandwiches. Big Red. The Girl with her iPod. Mike Davis and his new Girlfriend. Fea and Eg borrowing Ad's jackets. A ukulele session out of the boot of Ad's car while awaiting the start of the show. Man falling over. The full moon. Fea's chocolate chewing gum. Cokes for the way home.

Mustang Sally
Best Friend's Girl
Happy Days
All About You
Tainted Love
Meet Me In The Corner
Too Late
Saw Her Stand there
Shakin All Over
So Lonely
I'm a Believer
at Sunday, September 14, 2008 3 comments:

Practice for the 'Jeremy Irons Gig'

Present: All
And the winner of the "Who Can Keep Their Woolfire Festival Artists' Wristband On The Longest" competition is won by Ad.
The practice was dedicated to preparing for the Jeremy Irons Gig.  Plenty of the usual covers and Loopy's very own pop classics.
Ad splits his nail.
Post Practice Pint Topics of Conversation: What TV/Home Phone/Broadband package Gi should sign up for.  Humax [the joys of] and Eg's inability to download and install the latest software for his.  Why the Live Popcast idea just wouldn't work.  The forthcoming album was also mentioned at some point.
at Wednesday, September 03, 2008 No comments: