Lots of out of tune guitars this evening. Eg's scribbling down of all the wrong chords didn't help matters.

Eg's return from Dubai sees him playing Tobacco Mule for Ben. Ad and Tom's estimations for the non-duty-free price are way off Ben's reckoning. Eg wishes he'd charged him more.

Post Practice Pint Pub Prattle - Vegetable bar snacks; Loopy the Musical; Loopy television show ideas; how Eg could use Facebook; putting letters after your name; Job titles on business cards; massive television screens on back of aircraft seats - try not to be put off by what your neighbour is watching; Massive television screens in small hotel rooms; Eg's MBA presentation; Tom's busy work schedule; new Loopy T-shirts; the Chesterfields; which actors would play the band in Loopy The Musical - Tom imagines Kevin Whately would play Gi - Ad hopes for Jake Gyllenhaal for himself - Eg proposes Graham Norton for Fea.
at Wednesday, June 24, 2009 No comments:

While Eg is nomadically roaming India marketing his merchandise to the membership of the Mumbai Magnet Massive it's time to mix and master the Assembly Sessions.

Problems encountered included things like;
Remarkably, Ben managed to remove the popping distortion of Fea's over-enthusiastic intimacy with his microphone during 'Hearts Pumping'.

Still, the intention continues to be one that foists this output upon the band's unsuspecting fan base. Whoever she really is. Or he.

Ben rightly points out that these 'Assembly Sessions' should be released after the album is ready/released/available/'out there'. Otherwise people will associate the songs with these versions rather than the actual superdooper studio versions. The boys reluctantly concede this point.

While Ben mixed and mastered, the three Loopy attendees scuttled off to the back room to rehearse for the Schools Tour on Friday 10th July. They think they've licked that tricky middle eight in 'Just Can't Get Enough'. Well, Tom thinks he's licked it at any rate.

'Sky Above My House', 'Sparkle You', 'Kingmaker' were also worked on. Interrupted by red wine and Tom's recollection of the time he was invited to play for a Polish Prison Warden at his prison in Gdansk. The Tommy Cash at Fulsomski Prison Gig. Perhaps. 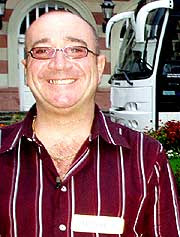 Ben and the boys also tried to work out why there was a consistent 'dropout' at 4m 21secs on the 'Hearts Pumping' recording when it doesn't appear in the original Multitrack Session. To be continued, no doubt.

Some 'Karaoke' versions of the tracks were mixed for popcast bedding music purposes.

Other Practice Prattle: Loopy Number Plates; Deputy Head interviews; £36.30 a week for two people to live on; M&S bean salad that everyone could enjoy a little while after Tom had eaten it; Coach Trip on Channel4; putting on gigs with kids; pregnant ladies and their heightened sense of smell; ukulele'ing a campire sing-a-long. 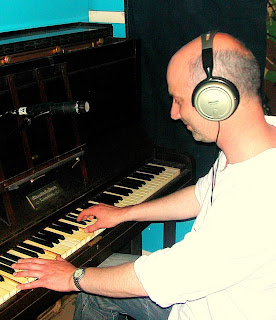 You're ten. At school. It's morning. Before lessons.

You 'single-file' into the Assembly Hall for the usual morning's mediocre musical moments with a resentful teacher on the piano. The head teacher spends the next 20 minutes trying to whip up a bit of enthusiasm for 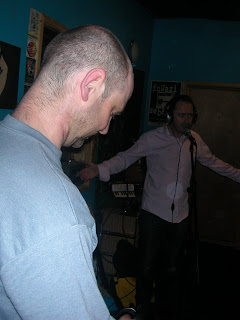 yet another feebly voiced rendition of 'All Creatures Great and Small'.

Well, as a treat, as a taster of the forthcoming album "Doing Somersaults", and as a gesture towards the forthcoming 'schools tour', Loopy spent this evening recording their own 'Assembly Sessions' while Ben was in the control room mastering the real thing.

These recordings will be freely available to visitors of the Loopy website.

Tom added some trumpet sounds to 'Corner of Your Mind' and a minor adjustment was made to 'Hearts Pumping'. Eg and Fea popped out to get some beer but were too late and returned with a bottle of Ribena and some tic-tacs. Ad and Tom recorded a small interview with Ben which will be available in the next Loopy Popcast. 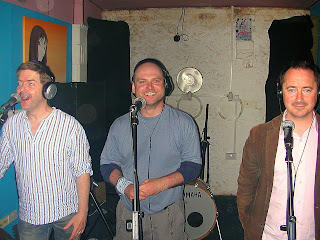