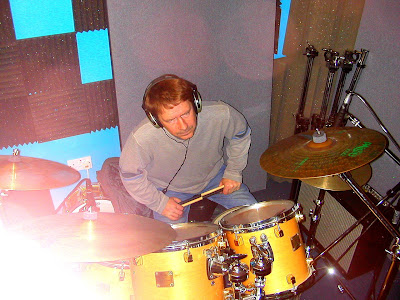 Gi's percussion completed on Wild End. Started off with adding some Cowbell. But it quickly became clear that it wasn't really the sound we were looking for.

Tom's guitar on Secrets & Lies along with a Gary Numan style keyboard sound for the chorus. He's firmly told by Eg to not bounce. 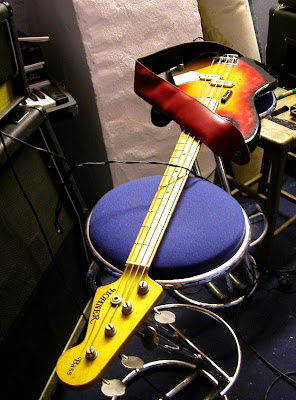 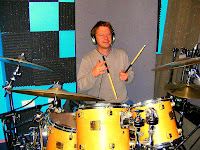 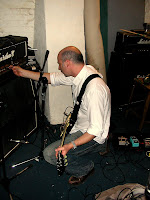 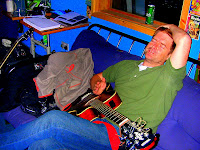 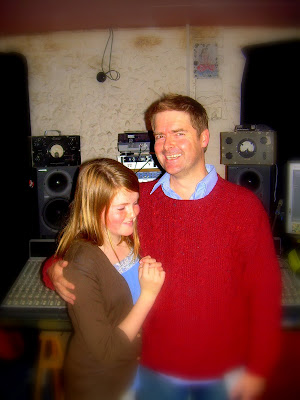 Recording can be really boring when you're a 13 year old Loopy groupie as the beautiful Phoebe Rayner was to discover this evening. It was either that or an evening being babysat by the grandfather. And we can all see the appeal of choosing the recording studio with Dad over that. So thank the lord for Nintendo DS, the teen pacifier.

And who could blame poor Phoebe as the only other entertainment on offer was watching Uncle Ad and Uncle Fea go into one recording booth while Uncle Gi was in his own with the drums. Eg was providing the guide vocals via microphone from within the control room where Phoebe and Uncle 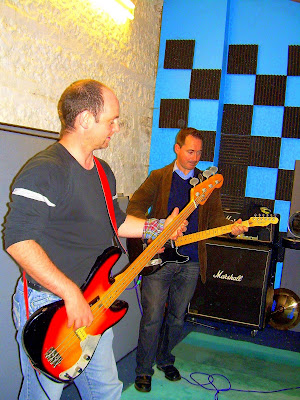 The priority was to come away from this session with the drums recorded, but Ad and Fea weren't exactly making the job easy for Gi. Neither of them seemed to be at the top of their game with Ad forgetting how the songs were structured and Fea playing, well, really badly.

Fea had to be forcibly removed from the studio and Tom had to be asked to not try out his backing vocals during the recording. His presence eventually being employed to silently conduct Ad through 'Secrets & Lies'.

Eventually managed to come away with drum and dodgy bass for 'Wild End', '21', 'Secrets & Lies' and 'Hearts Pumping'.

Eg tried to use his learned Management Tools to diffuse the potential stress of the situation by requesting we record a simple, and inevitably slick, version of the old Loopy classic, 'Someone'.

Interesting to see how a bored teenager and a tired and frustrated drummer show remarkably parallel behavioural deterioration patterns.

Open track surgery had to be performed by Dr Ben in a few places. [Cheap] beer provided by Ad. 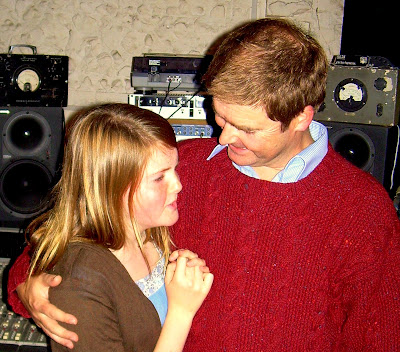 Songs were practised with a view to recording them next week. 2 new songs jammed into a better shape. Work done on Secrets and Lies, Gallery of You, 21, Wild End, Sparkle, Take On Me, Hearts Pumping.

Post-Practice Pint Topics of Conversation: Job Interviews, Fea's new word that he almost doesn't know how to pronounce - it means being a headmaster when you're not a headmaster. The releasing of small mini-albums being better than traditional ones. Tom on Jonathan Ross's Radio Show on Saturday. Lots of website hits. He urges the others to do the same.
at Wednesday, October 01, 2008 No comments: