Newer songs practised. Enjoyed reviving 'Someone' and 'Starting Out', plus we tried to remember '24 Hours'. And failed. Ben [Mr Valley Studios] was practising with one of his bands, passing the time while he was waiting for his girlfriend to give birth. Indeed, her waters had broken at 2pm. But no contractions. By tomorrow he should be a father. Bless him. Paid him for both the night's practice plus the short notice cancellation of last week. D'Oh!

Finished off with the usual pint at our new favourite local. Topics of conversation: Loopy blog, an inability to cope with technology, being on a stag weekend, an over-sensitivity to narrow-minded people.
at Thursday, May 31, 2007 1 comment: 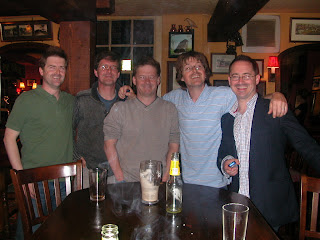 We all met up in the Queen's Head in Newbury Market Square. Talked about names for babies, ebay, the girl who kept trying to take our empties, Bruce's partner's dressing gown [Where did it go?] and mobile phones making that annoying shutter noise for when they take pictures ['it's The Law' according to Eg] ['Really?' gasps everyone else]['No it's not, you plonkers' according to Ad]. 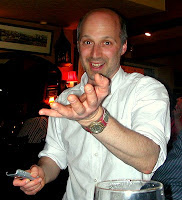 First time in quite a while that all Rayner brothers were in one place at one time. Yawn. Must be nice for one family to share such a responsibility for the World's overcrowding. There's always Tom and I to keep it real. As ever. Though we clearly missed the opportunity to reduce the Rayner genetic footprint that evening.

Anyway, all this meant Ben at Valley Studios had to go without our rehearsal noise. So at least someone's happy.

Fruitbat screeching behind the bar, the awkward parking, the paddling pool to get through to the urinals in the gents, the late night three setter. No changes back at The Hobbit then.

This time we had Oxford's very own Shirley to kill off the first set for us.

And how good were they? Tight, poppy quality songs. We loved them. With our old pal Alan on guitar. I think 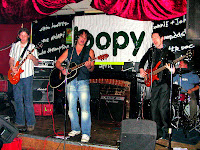 this was when Eg decided we were going to get Alan to do a turn on stage with us. Teenage Kicks would do.

So our 2 set performance was the usual mélange of Loopy old and new with plenty of covers thrown in. And whilst Shirley were clearly the 'musicians' of the night, loopy - as headliners - were always going to enjoy the audience at their drunkest. Though I have to say, after we had called Alan from the audience for his Teenage Kicks stint, thereafter the audience shouted 'We Want Alan' after nearly every song. Very funny. Perhaps.

Quote of the evening:
"I've just worked out why we're all acting so happy: it's the band" girl at the bar, heard by Tom during the break after the first set. 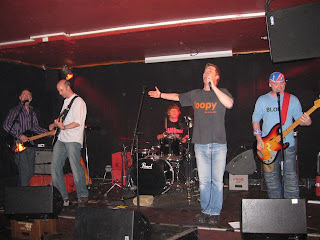 "This is our last gig, cos in a few months time we're all going our separate ways to University" was what the fresh-faced lead singer proclaimed before launching into the last number. I'm Widely Spread. That was their band name. There were a lot of them on stage too. They were indeed widely spread. And they were supporting us. Though to be honest, we should have supported them. Good songs, a good feel and, most importantly of all for these small venues, a good following. 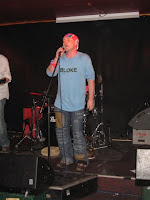 It was Fea who was the first to break his silence. How he longed for that youth again. And, to be honest, they were a seemingly good advert for it. Bastards. And let's face it. Fea is getting on a bit.

When I'm Widely Spread left the stage, so did their fans abandon the floor. Leaving seven of ours old faithfuls looking somewhat embarrassed at their shoes. We've had lower attendances but the years have made them seem few and far between, and this was one of the funniest. So we treated it as a band practice with friends. Which is always nice. 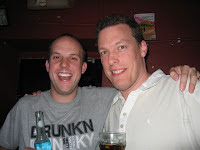 Support Acts:
Set:Photos:
Catrine Barry
at Wednesday, May 09, 2007 No comments: