It was snowing and fogging. Tom picked Ad and Fea up from Newbury. Tom keeps his music equipment in his car because he has no room in his house to keep it. Ad got in the back with a large and heavy keyboard on his lap. The phone call came through that Eg needed picking up too. He squeezed in the back with Ad meaning the vertically placed guitar had to be laid flat on top of the keyboard across both back seat passengers' legs.

Fea would have been giggling in the front had it not been for Tom's 'interesting' driving.

Gi was already at the restaurant when the steamed up vision of Tom's car appeared, snow-crunching its way into the car park.

This year's Cracker Special provided by 'Santa Claus' contained mechanical Brussel Sprouts and a racing circle in the form of a drawing of a plate. The sprouts needed to be wound up, placed in the middle and let go. The last sprout Out [off the 'plate'] gets knocked out.

It was Gi's birthday too. 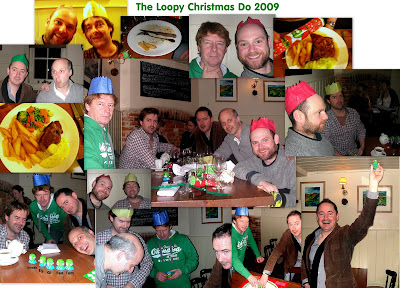 Low key rehearsal involving some new songs, some current songs and some oldies. Held in the old control room at the back of the original unit. Huddled around the sofa at the end, sitting on amps and stools. Ad gives Tom the chords to one of T's favourite Fountans of Wayne songs 'Leave the Biker' Tom sings it to Ad and Fea. It remained unrecognisable.

Ben has finally moved into his flat in Winchester.