Living The Adventure - The Best Of Loopy

Download or order by clicking here
It was a gruelling process.  Choosing which of Loopy's officially released tracks from the past 20 years could be put on a Best Of compilation.

Originally, "Sparkle" seemed to fit.  But then the best artwork dictated that "Living The Adventure" is the most appropriate.

And how many tracks?

Originally, 12 was the number of tracks that the band was aiming for.  But then the wrestle for song selection was made so much simpler by adding two extra slots.  So 14 songs is the most appropriate.  AND it means that the album will fit on one side of a C90 cassette - the preferred album length and format when the band started out 20 years ago.

Indeed, Tom and Ad were recalling how the first album, "Dazzler", had its tracklist chosen on the basis of an A and B side.

A million gigs, a handful of singles and five albums later, here we are.  For your pleasure.  Why not order a copy for the one you love or download the album for free. 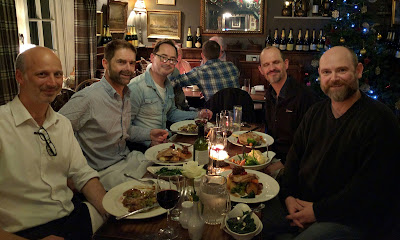 Dom's chocolate ball sack was up for grabs as he came up with another blinder of a quiz, which Eg won by half a point.

It's the annual Christmas Loopy Do next week where our five 'maturing' revellers don bibs and grab sippy cups to celebrate the season of good pop.

Also to be celebrated is the forthcoming 'Best Of' album.  How wonderful for you.  A vanity project for sure, and with more tracks than you're probably imagining, it'll include 14 songs that were voted for by the band itself.  All taken from the band's 20 year canon of recordings so far.

And if you want a copy, you'll just have to stump up for a bit of postage.  Shall we say a quid?  Yes, let's say a quid.

In the meantime, and imminently, the Christmas single 'Gallery of You' will be available for your jingly, twinkly, glittery and tinselly pleasure.

A new song, 'Long Distance Runner', is currently being recorded by our friends at LittleSmasher.com. Dom's drums have been mixed and we're in the middle of recording the backing vocals.  Stay tuned for more.
at Sunday, July 26, 2015 No comments: