Venue: The Chestnut Horse in Easton

Armed with crackers with footballing snowmen in them [thanks to Minty], the Loopy boys managed to clear the pub with an impromptu table top soccer match.

Actually, that didn't happen. The Loopy Boys waited for all the other diners to leave before they dared to get the footballing snowmen out and even then they were scared they'd get told off. 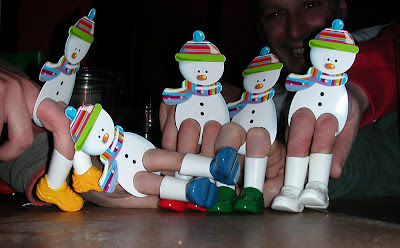 [From left to right: Felix, Eg, Tom, Ad, Gi]
The bill was paid with Loopy funds thanks to the Wootton Bassett gig in August. Ad was going to be denied a starter due to the missing of one of the year's gigs. But rapidly earned it back when he pointed out that he had been the link that got the Wootton Bassett gig.

Topics of Conversation: How to choose a wine [check it's the cheapest], the general deportment of the waitress, plans for next year [EP], the science behind getting the best seats on flights,
at Thursday, December 13, 2007 No comments: