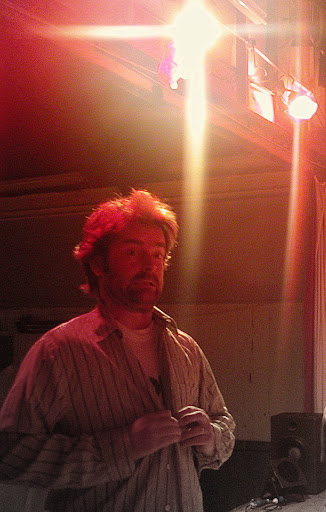 It was Sue's 40th Birthday. And Rowledge Village Hall has no real distinguishing features other than two large bay windows at the front. Very much, in fact, like all the surrounding houses in the village. Which is why Eg ended up zooming past it, Ad only got as far as the village Pub and Fea sat around waiting for help in a nearby layby. Miraculously, inexplicably and somewhat suspiciously Tom and Dom pinpoint it precisely. [Tom confesses later that he had actually been there before.] 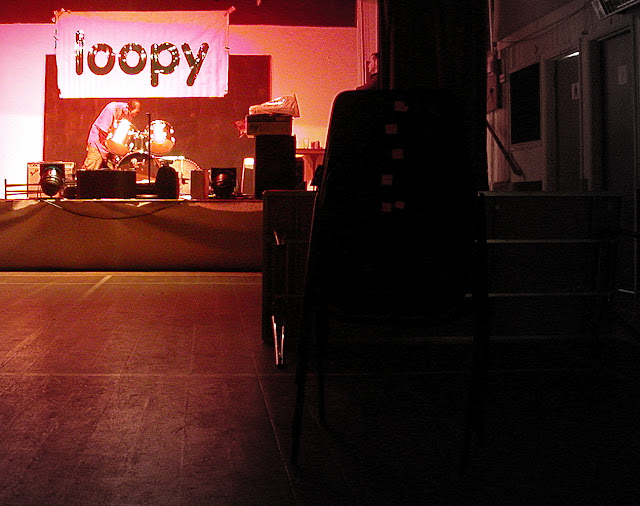 Ad, Dom and Tom arrive earliest and set up. The organisers finish their setting up and leave telling the boys to help themselves to the booze while they're gone. Two speeding humanoid blurs desert Tom during one of his many sentences, cometting to the bar.

Eg and Fea arrive wondering where the beers came from. 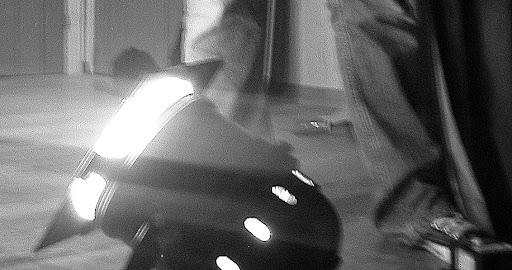 Tonight the performance took place on a proper Town Hall style stage with footlights and overhead theatre lights. The banner was wonkily taped up above the drummer's stool by Tom and Dom, while Eg assembled his brand new microphone stand - one with a circular weighted base, one with which he could dance. Everyone had a play. The Sound check was made and while Loopy waited for the guests to arrive they sang 'Love The Way' to pass the time. 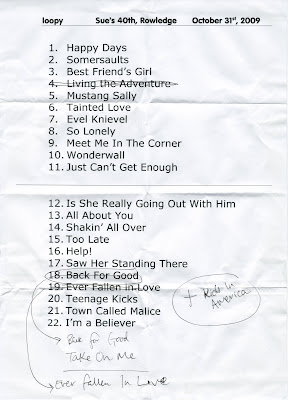 An interesting start to Mustang Sally caught Ad off guard while Eg forgot the ending altogether for Back For Good. Is She Really Going Out With Him won the audience over again.

Happy Birthday was sung when the birthday cake was brought out in between sets and a healthy amount of pretty ladies danced at the feet of the boys for most of the night.

The Buffet
Three types of home made curry were available; vegetarian, chicken and beef. These were accompanied by shop-bought small naan breads and little bhajis.

A well laid out and comprehensive completion of catering configuration that couldn't fail to conquer one's palate and one's appetite. 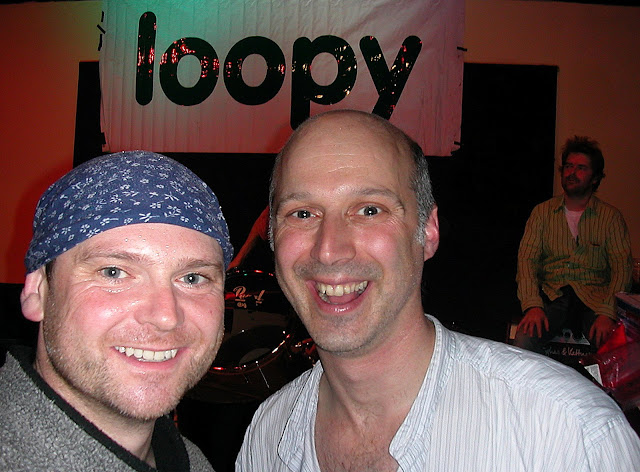 Overall score: 7 out of 10. After being negotiated down from an initial eight - due mainly to the number of peas in the chicken, the lacklustre [shop-bought] naan, the ever-so slightly watery vegetarian option and the fact that it repeated itself rather unnecessarily on both Ad and Fea later on. A new way of scoring buffets is proposed to make it more like Strictly Come Dancing.

The gig finished with most guests remaining on the dancefloor shouting for more.
Between Set Prattle:
Eg's arrival in a Nissan Micra with flowers on it; Tom doesn't like people who play golf; when does not paying for something change from 'an oversight on the part of the cashier' to 'outright thefty shoplifting'; the unhealthiness of hankies; the repeating curries; the guest appearance of SuperNanny; a full set of Humax owners; the repeating curries; the revelation that Fea managed to copy a file from Humax to his computer without Ad's help; the repeating curries forcing Fea to repeat in the gents; two drunk ladies plotting to give Tom more female attention than ever before; Dom buys tickets for his family to go to a Christmas Strictly Come Dancing adventure just as his kids start to prefer The X Factor. 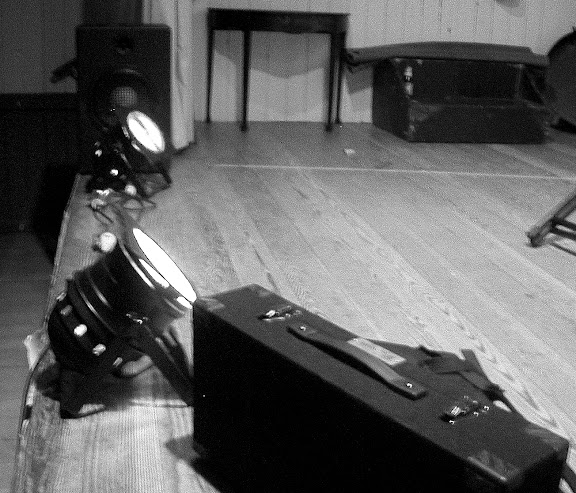 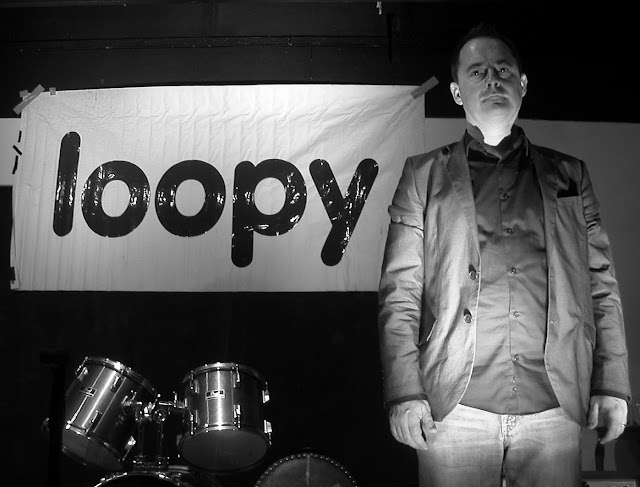 Is She Really Going Out With Him
All About You
Shakin All Over
Too Late
Help!
Saw Her Standing There
Kids In America
Teenage Kicks
Town Called Malice
I'm A Believer

Back For Good
Take On Me

Ever Fallen In Love 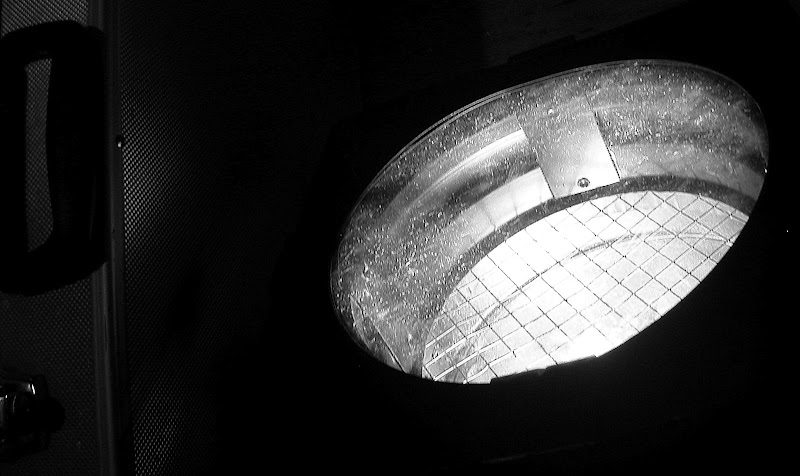 Present: Ad, Eg, Fea, Tom
Venue: Uprising Studios, Boundary Road, Newbury
Dom joins the boys on drums.
Apart from the usual rehearsing of covers and poppy originals required for the gig on Saturday, three new songs were worked through again. 'Sparkle You', 'Lie Detectors' and 'Sky Above My House'.
Dom went home before the rest of the boys headed down the Hog's Head for their Post Practice Pint.
Pub Prattle: House hunting; how 'mature' many of the punters were in the Hog's Head; extending one's house only to move home immediately afterwards; charging for the album
at Thursday, October 29, 2009 No comments:

Present: Ad, Eg, Fea, Tom
Venue: Uprising Studios, Newbury
Expecting a full practice with Dom on drums, the band turned up only to be told by Tom that Dom was ill and couldn't come. The disappointment reflecting the desire to play with the highly talented ex-Chesterf!elds drummer [pictured], of course. While awaiting the studio room to vacate, the album boxes were distributed and the cover was pawed over. The accidental omission of cellist Rufus's name being the most obvious disappointment.
Rehearsal began with a run through of some of the covers that will be expected to make an appearance at the gig next week. Then with a knock at the door, a young looking lad asked if he could sit in on the vacant drum kit and join in. His name was Jamie. He was 19 years old. After an initial uneasiness we did a couple more covers including 'Just Can't Get Enough' - much to Jamie's amusement.
New songs 'Lie Detectors', 'Sparkle You' and 'Sky Above My House' were worked on with the last two enjoying Jamie's drum accompaniment.
The evening ended down the Hog's Head for the...
Post Practice Pint Pub Prattle: Fea's former pupils serving him in a pub; Loopy [not] entering X Factor; Self-congratulating over the album, Doing Somersaults; The forthcoming Loopy Christmas Do; How lucky the band have been with stand-ins; Rick the Hungry Drummer; Oxford Magnets being a corporate leaf off a branch off a much larger parent company tree.
at Wednesday, October 21, 2009 No comments:

Loopy start polluting You Tube with their own amateur emissions. Starting with Eg's footage of the A34 Schools Tour...

Picking Up The Album 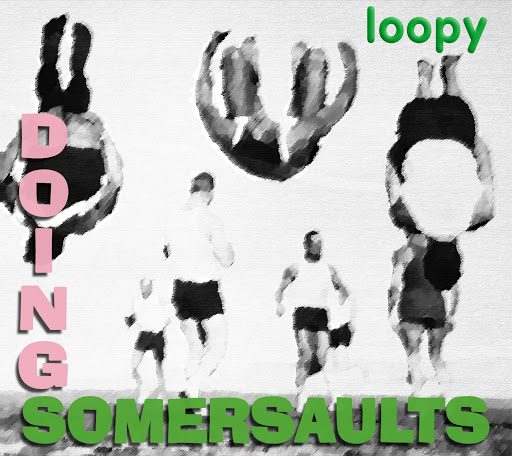 Ad and Tom don't quite meet at the venue. Tom gets there first and leaves a box for Ad to pick up when he turned up 10 minutes later. The excitement palpable in both.

Was there a thumbs up for the cover quality?

Practice for the Gig Later in the Month

Had a lengthy mid-practice break talking to Ben, interrupting his DVD viewing. He's on the verge of setting up a new studio in a new building 2 miles up the road, whilst keeping the current set up as rehearsal space.

Post Practice Pint Pub Prattle: Fea's fundamental demands of his children as they grow up; a possible hung parliament potentially changing British politics forever; Dom's drumming; Dom's flask of coffee he brings with him to gigs; picking up the new album tomorrow; being exhausted at work; competitive parents at school events;

Worked on the new songs and deliberated over the logistics of rehearsing with new part-time drummer, Dom. And the gig at the end of the month.

Eg produces USB stick with band photos and footage from the A34 Schools tour. Ad wrestles it off him.

The CDs of the album will be physically available later this month. Actual release is to be scheduled with iTunes availability.