Recording: Rufus and his cello 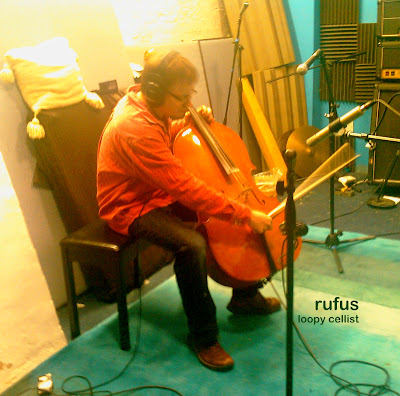 Special guest, and lovely man, Rufus was with the boys tonight [he from 'Friday in Firenze' fame]. He and his cello were added to four tracks this evening: Hearts Pumping, 21, The Smile and Love The Way with intentions to use him on a further track that the band needs to re-record from scratch [Wild End].

Mulled wine was raised to congratulate Ben on his Gretna Green marriage and Fea on his new Head Teacher post. Commiserations were forthcoming however to Tom who's Eg-given USB key from the previous week turned out not to be 360GB after all. The tech boys at his work put it through its paces to discover that it was in fact 2GB. And a rather slow 2GB at that.

The making of cheese is discussed. Tom's going to give Fea a book on it. It's all Rock n Roll down at Valley Studios this evening.
at Tuesday, February 24, 2009 No comments:

Had recording planned for tonight but Ben couldn't oblige. So the cellist and violinist were cancelled.

Eg has recently returned from China and brought with him a USB key that claims to have 360GB of memory. No-one believes him. Tom gets the spoils to play with.

The Monkees songbook provided the lads with an opportunity to learn Daydream Believer. Passers by would have been forgiven for thinking that this opportunity had been spurned.

Eg drops guitar and loses jack socket. 'Want You Back' - well remembered. 'It's All About You' - not so. Was that 'Dream A Little Dream' we heard on the ukulele?

Upcoming gig dates were discussed including a Schools' Tour. Basically that just means the band plays in three schools - an assembly and a couple of music workshops. And a wedding - of two Loopy Groupies - approaching fast.

Post Practice Pint Topics of Conversation: Loopy download profits declared: $15. 'Then She Said' topping the Loopy charts along with 'Ben & Jason'? What is China's currency, actually? Shooting a video of the band doing a dance routine and put it on You Tube.
at Tuesday, February 17, 2009 No comments: