Interesting one this one. The Bride and Groom were big fans of the band. And especially wanted the boys to play at their wedding.

News came in late that the band was a drummer down. Wedding Guest Tom left the proceedings to organise a replacement via Ben at Valley. Nice young man called Rich took on the task. He motored all the way from Winchester to Cain Manor with a make-do drum kit cobbled together by Ben and stuffed into the back of his car.

Awaiting Eg and Fea, Ad verbally took Rich through the songs on the set list. Subtly muting himself whenever a wandering guest came within earshot.

So, with no rehearsals, no idea what songs he was going to play, a few loopy originals thrown in for good measure and only Ad’s mumbled beat-boxed drum rhythms to go on, Rich was looking a little nervous.

He was also incredibly hungry.

With the wedding speeches over, the kit was set up and arranged. A small plate of sandwiches magically appeared for a trembling Rich. The rest had to wait for the buffet later in the evening.

Within the first couple of songs it was clear that the band was ‘Going To Be Alright’. Rich was a steady drummer and managed to relax enough to play some fine fills – especially in many of the covers that were played – and to start and stop, pretty much well enough for no-one to notice 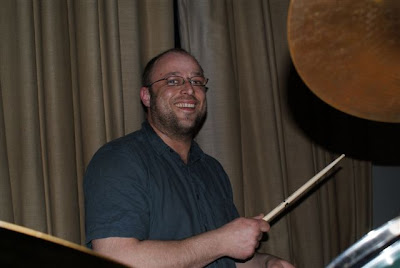 Two sets later, with an a capella and a couple of drumless numbers [Too Late, Take On Me] thrown in at the beginning of Set 2, Rich was Loopy’s New Friend.

In fact, you could say he was the band’s new buddy, Rich.

The Groom, also stepped up to play a very quiet guitar along with Tom while Eg sang a specially requested Simon and Garfunkel number.

The Buffet consisted of most of the usual quiche, sandwich, pizza and satay chicken on a stick options with the interesting inclusion of asparagus spears wrapped in salmon.

The Bride looked beautiful, the Groom handsome and both had apparently had a rather good day.

Other stuff: Small kids in front of the band dancing; Fea keeping his calm while talking to the Offensive Mad Midget who wasn’t a head teacher after all; Tom MC’ing. Bride’s sister using Ad’s mic in the encore to sing along to Take That’s ‘Back For Good’ while Ad sings ‘Want It Back, Want It Back For Good’; Eg getting the Maitre De to bring coffee for him, Ad and Fea; Ad getting his leg felt up; Ad performing the Kids From Fame’s ‘Desdemona’ in the lobby before leaving. 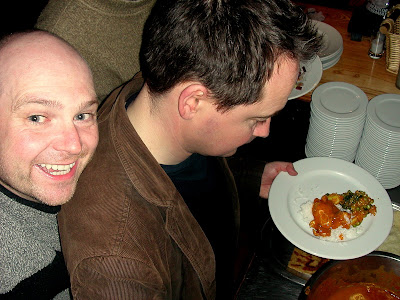 Ploughed through a bit of everything this evening. Covers and Originals. All in the hope that the wedding guests on Saturday week will be too drunk to notice the inevitable balls ups.

Rolling up at the Willow Tree at the usual Few Minutes to Closing Time the boys were greeted with the exquisite delight of a pub that had just finished a Curry Evening. 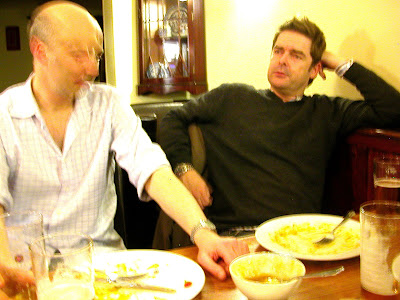 Post Practice Pint Topics of Conversation: The curry, the curry, Giles missing out on the curry and the curry. 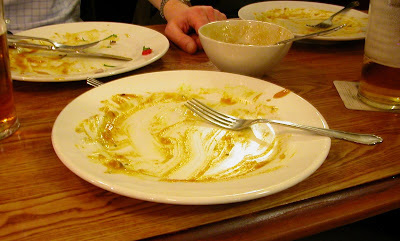 Parking hell at Valley Studios. Rain, wind and more rain. The boys run through as many of the old covers and past loopy faves as possible in preparation for the wedding in a few weeks time.