Gig Alert - Sunday On The Glebe

Loopy will be playing this Sunday on the Glebe Field in Stockcross, near Newbury, off the A34.

Eg doesn't have a hernia after all. Though he's still got enough discomfort to use as his excuse to avoid heavy lifting. Ad, remembering his own pain management issues, readily concurs [*lumber-rub, lumber-rub*].

Bit of a microphone stand shortage tonight. Jamie, the nice chap behind the computer screen in reception who looks a bit like Jeff Albertson, unsuccessfully tried to find some extras. Though he did manage to provide the boys with parcel tape which was generously wound around a broken stand and a microphone shaft.

In view of the street gig next week Dom managed to hire the drum kit from the studio - they should be able to deliver the drums at the venue too. Marvellous stuff.

There was a well-paced rendition of 'Sparkle and Shine' and a complete collapse of composure during 'The Sky Above My House' due to an arrestingly wonderful drum fill from Dom.

It's great being in a band.

Post-Practice Pint Pub Prattle
The mean number of legs on a human is less than 2, and other creative uses of the three main averages; what to do with pets when trying to rent a house; a general lack of surprise met the news that Winchester's First Inn Last Out, the pub where Loopy used to enjoy the Post-Practice Pint, appeared on TVs 'Hotel Inspector' as the first B&B in which the 'expert' has refused to stay the night; Tom's ground-breaking house-management advice "always carry something when moving from one room to another"; job applications and the worthiness of putting one's hobbies down, especially ones enjoyed in a group; and if we lived on an island how would our economy work and evolve?
at Tuesday, April 26, 2011 No comments: 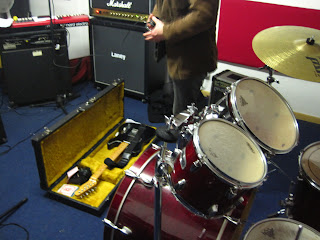